Would it surprise you to know that Jeff Bezos, the CEO of Amazon and the world’s richest man, is power-driven and persuasive? Probably not. But it’s interesting to note that he also ranks low on humility and emotional awareness.

These stats come to you courtesy of GoGig’s proprietary algorithm, an innovative personality assessment that takes into account social media like Twitter. With help from our revolutionary personality assessment, GoGig reveals intriguing things about famous people—and everyday job candidates— across the world.

Jeff Bezos gets a 97.52 out of 100 on the scale for ambition. He strives for success and has a strong positive response to other people who are interested in the same ambitions.

Perhaps that’s how he’s built a fortune of more than $100 billion and is projected to become the world’s first trillionaire.

Bezos also ranks high for adventurousness, which is essential for an entrepreneur. It’s no wonder that he’s known for having one of the most extreme (and expensive) hobbies in the world: deep-sea diving for old rocket wreckage.

Despite having strong ambition and an adventurous spirit, Bezos isn’t so obsessed with the big picture that he misses the details. In fact, he ranks high for conscientiousness. This means he’s good at following through on day-to-day promises and making sure things don’t fall through the cracks.

Of course, all that conscientiousness can be taken to the extreme. He’s also a bit of a micromanager. Bezos’ GoGig profile shows that he likes to be consulted about decisions, even when they are of little importance.

Bezos gets a 99% for being power-driven. That makes sense, considering he’s one of the world’s most powerful people. He actively pursues power through purchasing media organizations, investing in valuable companies, and buying out his competitors.

On the scale between emotion-based thinking and analytical thinking, Bezos practically falls off the scale toward analysis. He has a low emotional awareness and prefers to make decisions based on facts.

Love him or hate him, most people value Bezos’ opinions about things. He ranks high for persuasion, which is an important characteristic for leaders.

Bezos’ GoGig assessment shows he’s good at building instant rapport with other people. And when he connects with someone, he displays loyalty that cements his long-term bond with them.

When you’re the richest man in the world, does it go to your head? Well … yes. In Bezos’ case, it does. He scores a very low 5.4% for humility.

While research shows that good leaders are humble leaders, the richest and most powerful leaders aren’t necessarily humble. Humility is not always rewarded in companies, or society.

Maybe Bezos finds it hard to be humble, since he makes more in 1 minute than most people make in a year!

Bezos isn’t just rich and powerful. He’s also joyful. He gets a 99% score for happiness. So what makes him happy? Money? Power? Fame?

According to Bezos himself, his deepest happiness comes from putting his health and loved ones before business. He gets long stretches of sleep, has low-stress breakfasts, and spends lots of time with his family.

Surprised by what you see in Jeff Bezos’ GoGig analysis? Download the full personality report today to see more and see the full power of GoGig’s Candidate Personality Algorithm. 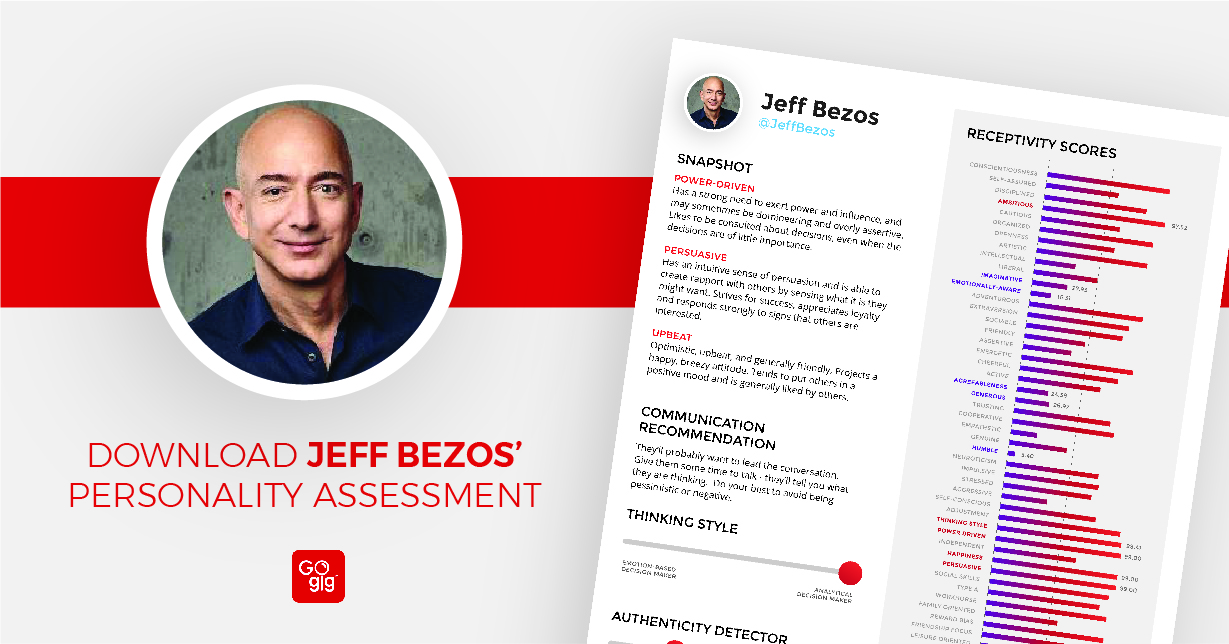